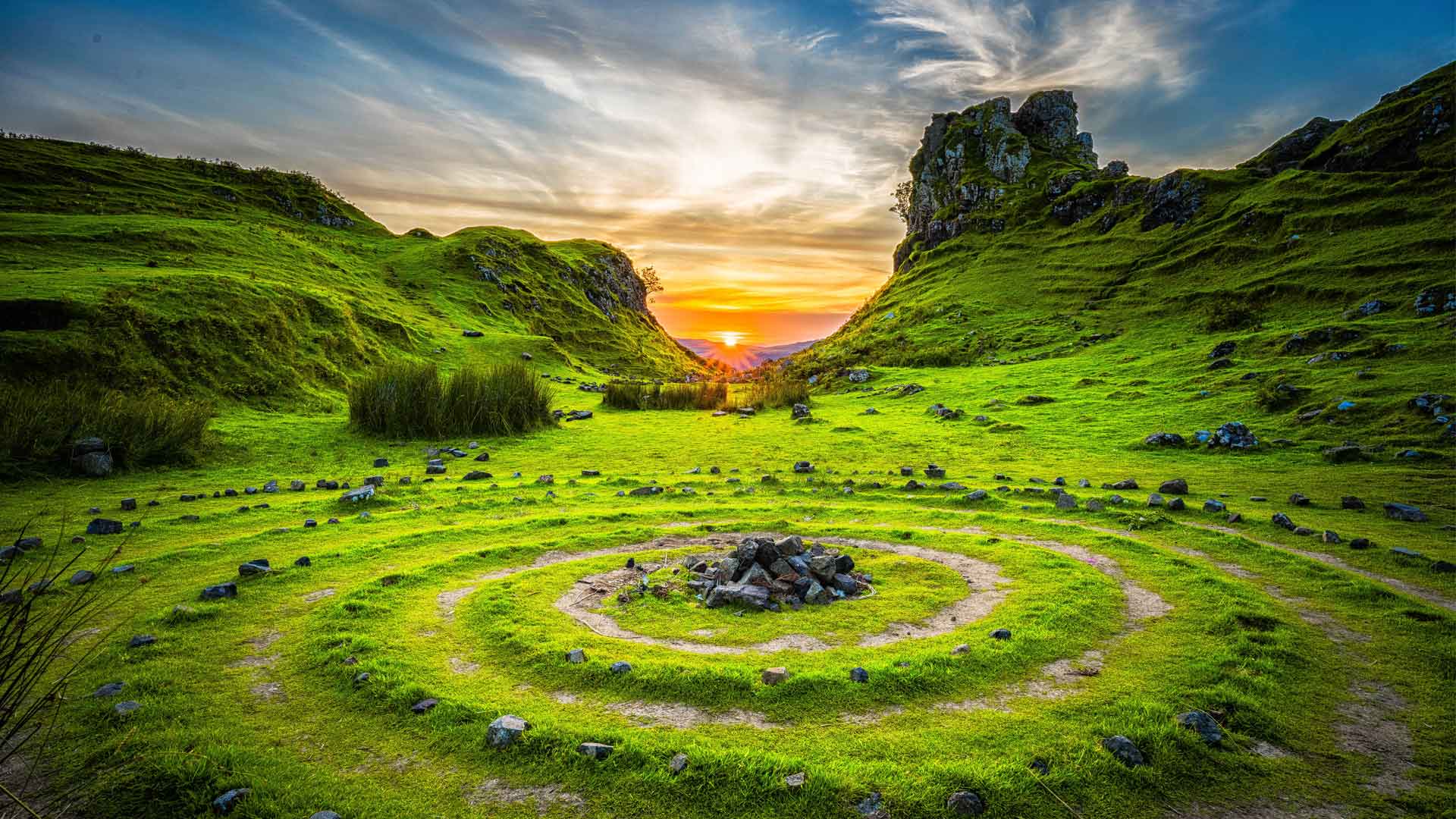 You are here: Home / 7 Skills / History / Ancient borders: How to make travel interesting in your novel

Traveling is something that every epic fantasy novel will have to deal with.

But, it’s also something not a lot of writers do well.

Are you one of them?

I’m sure you’ve read the kind of novels I’m talking about.

Long, painful stretches of characters walking. Pages and pages of the main character emoting about their feelings.

The author spends a whole page (or more!) describing how a snowflake drifts through the air and lands on a nearby tree.

If you’re the kind of author who wants to do more than “skip time” to the next town then this is the article for you.

I’m going to give you one way to make traveling interesting. But you have to use it carefully. Do it wrong, and it will bog your story down quicker than a field of cement.

So here it is…

Going from one land to another can be a major event in your character’s journey, but how do you make the border crossing interesting?

I’ll come onto that later on.

If your fictional world doesn’t have digital technology to defend its borders, such as

then it is essential to understand the history behind the borders of the ancient world.

Because, the nations before us kept their borders just fine before the advent of the digital world, and maybe their successes will inspire your own writing.

How were ancient borders determined?

Before the rise of empires, states, and civilizations, there were groups of people who lived in different areas together. These people didn’t draw lines in the sand or hang up signposts to mark their borders. Instead, they used natural landmarks.

They’d use lakes, forests, rivers, and mountains to mark their land. It was really a ‘you stay on your side of the lake, and I stay on mine’ type of system. These natural borders weren’t patrolled or regularly defended, but their natural formation made them easily recognizable, as well as hard to cross.

Sometimes there were even neutral zones beyond the borders, where a certain spot between two territories was delegated as belonging to no one, and people could trade or conduct diplomacy there.

Iceland’s parliament fields are an example of a neutral zone. Viking tribes would meet there to discuss trade, raids and other matters of governance.

When did countries start having borders?

The first major border was the Great Wall of China, built by the Qin Dynasty in 221 B.C. to defend their lands against Mongol incursions. It was primarily a defensive structure, where soldiers could stand their ground and fight against invaders. The wall also functioned as a warning system, where signal fires could be lit to warn about approaching enemies.

Other nations soon adapted the idea of a great wall, often marking their territories with forts and strongholds to prevent an attack and act as a warning system to the rest of the nation.

But ancient forts were a deterrence, not a defense

While most forts were garrisoned with soldiers and built to withstand sieges, they weren’t used to defend the land and keep the enemy out. The primary function of the fort was meant to deter enemy aggression.

You are a great barbarian general, leading an army of your people into the borders of ancient Rome. As your horde marches, you see a large wooden structure on the horizon. The structure is a fort, and already the men inside are yelling about your presence.

Your horde is a raiding party, and you have no siege weapons, nor the time to starve the garrison out. If you attack the fort or besiege it, it is likely that the Roman armies will arrive before you are done.

If you march on, then when your raiding is done, you will have to contend with a very hostile fort blocking your way back home. What do you do?

That was often the conundrum faced by invading armies. They could besiege or even attack the fort but would lose men, supplies, and time.

If they moved on, then they had one more obstacle to contend with on the way back home.

Most early nations built several forts next to one another and depended on them to slow an enemy down until an army could get there and defeat the invaders in battle. The more forts you had, the greater your projection of power was, and the stronger you seemed.

Even though forts couldn’t be everywhere, nations often built enough of them to serve as sets of ‘eyes and ears.’ This allowed for a much tighter defense of the nation.

The burgh system of fortified towns used by Wessex in the 9th Century England is a key reason they held off the Danish invasion. While the rest of England became Daneland.

However, despite the presence of fortresses, people could still cross the borders. They did this both legally and illegally and used many of the same transportation methods that we use today.

Most borders weren’t heavily patrolled by their nations because they were so long and the terrain was rough. Aside from the occasional fort every hundred miles, much of the borders were either natural terrain or unguarded.

Traders, merchants, refugees, and other groups of people could easily cross the borders without too much trouble. Trade was extremely viable for everyone, so active trading and moving of people from one place to the next was encouraged by local governments and kingdoms.

Some people might have had to pay a toll or a tax upon entering a city or going on a well-traveled road, but for the most part, the borders were relatively open.

Most of the ‘illegal crossings’ were typically raids conducted by bandits or invading armies. Those were often cracked down upon during wartime, but if a raid happened while at peace the nation was often slow to respond. If they even responded at all.

Characters have it easy when travelling from place to place in fiction, and there’s a big reason for that. In fantasy stories, just like in ancient/medieval history, borders really didn’t exist like they do today.

Everything was less centralized, and the real trouble for people moving about often happened between city walls, not on the borders. Local chieftains and leaders would typically tax their own people and attempt to control migration and immigration. If you walked into an ancient city, you were supposed to follow the rules and regulations set by the person in charge.

Every single city had its own rules and guidelines, and it wasn’t uncommon for the local governors to bend or break those rules to suit their own purposes.

This is how you make border control interesting in your story.

Are there any natural boundaries that you can take advantage of? (Oceans, rivers, mountains?) How would having a natural border impact war or trade?

Are your characters at war or aligned with another nation against an enemy? They might have to deal with getting by a fort, or increased guard patrols.

Maybe your nations do have borders that are controlled like they are today. Magic could be used to prevent all entry except at a specific point for example, or perhaps your nation uses monsters as guards to catch the unwary and keep them out.

Maybe a nation has spent the time and energy to build a giant wall over all or part of its borders. If so, why did they do that? Are they trying to keep something out or keep their people in?

Start asking yourself those questions, and you’ll be well on your way to drawing up the purpose of the borders. Once that’s done, they can provide new challenges for your characters.

Brady is a Worldbuilder and Story Development coach, who loves to help writers and creators tell their stories and get their own personal stories told. In his spare time, he also loves practicing music and playing a good video game! Visit Brady's website.

Become a patron of the Worldbuilding School

The Worldbuilding School is using Patreon as a way for readers and fans to support our goal of building an online resource for worldbuilders.

Use the button below to learn more about Patreon and how to support the school.

This website uses cookies to improve your experience while you navigate through the website. Out of these, the cookies that are categorized as necessary are stored on your browser as they are essential for the working of basic functionalities of the website. We also use third-party cookies that help us analyze and understand how you use this website. These cookies will be stored in your browser only with your consent. You also have the option to opt-out of these cookies. But opting out of some of these cookies may affect your browsing experience.
Necessary Always Enabled

Any cookies that may not be particularly necessary for the website to function and is used specifically to collect user personal data via analytics, ads, other embedded contents are termed as non-necessary cookies. It is mandatory to procure user consent prior to running these cookies on your website.

Receive Updates From The Experiment

All you need to do is enter your email address below: